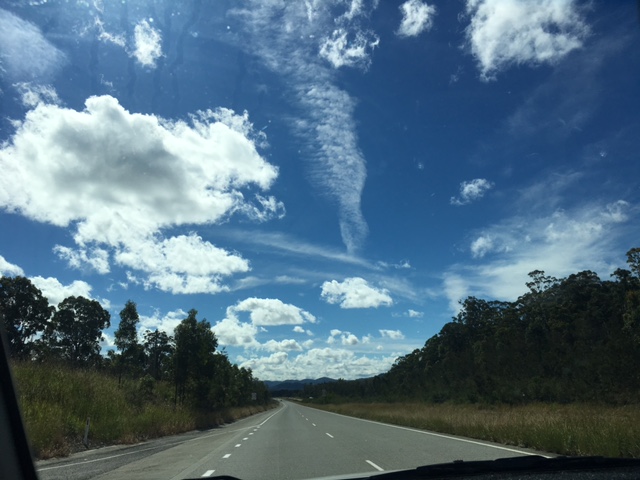 I had not seen Trish and her family since January. I missed her and her brood! It’s only a bit over two hours nowadays, and having been a regular driver from Newcastle to Melbourne, sometimes doing that trip in one stretch, it’s a bit of a pushover. The road is great and we know it well.

But anticipating the toll the trip might take on me in my new ” state” – not to mention on Trip,e L who has to put up with me – it loomed like a challenge that could easily go belly up!

Advice from everyone – take plenty of breaks, don’t forget the water, pack your crutches, your walker, your grabber stick, remember the importance of ” depends” – we said goodbye to Roscoe and his guardian and off we went.

Being a man of routine, Triple L did not deviate from former practice. Sandwiches cut and packed, a stop for a coffee at Maccas (three minutes from home), a stop at the servo next door to fill up the car, purchase of “fizzy drinks” ( sugar free) lollies ( sugar free) the trip unfolded with military like precision! Two toilet stops later, we arrived.

it was a beautiful day for a drive and a most comfortable one at that. Having lost a bit of weight, I think I must fit in the seat better. I had none of the usual aches from pressure points – where the seat belt buckle dug into my hip or the edge of the seat impressed itself on the back of  leg and so on. I managed to get in and out of the car and to negotiate the step onto the verandah when we arrived.

the nine stairs to the guest room were not an issue thanks to the crutches and the ” up to heaven, down to hell” technique!

however, there was one rather large hurdle that nearly brought me undone and turn away now if you are a little sensitive. That hurdle was the toilet! The house has three toilets – none of them on the ground floor! Not surprisingly enough, the toilet had presented a challenge at home too. What is now referred to as ” the toilet accessory” – the commode like thing that goes over the toilet to raise the height of the “drop” caused untold discussion between the men of the house. My only concern was that my ample ” glutes” would see me stuck between the hand  rails. But we got over that and it’s all good on the home front!

Not so on my first trip to the loo in Port! Having made a most impressive deposit I was stuck on the seat, it is a very low toilet. No amount of ” nose over toes” or ” don’t drop you bundle” helped! Ingenuity kicked in and I called Triple L to bring the walker up to me.  He felt one crutch would do the job. So there I was, low squat painful position, negotiating the walker into the small cubicle, him on the other side of the door with the crutch! We ditched the latter and finally, his arm appeared, propping open the door and he said ” hold this’,!

He was exhausted! Seven weeks of looking after me, listening to me howl when the pain is too hard, washing, cooking, doing everything and at the end if the trip offering his arm, from the other side of the almost closed door, to hoik me off the loo and into freedom and that’s what happened!

Before the day was over, Trish had organised for us to hire a ” toilet accessory” for the length of our stay and it was duly installed – again by Triple L!

You know, I get cranky at all those reality TV shows that are based around finding love at first sight, getting through the seven year itch etc etc. In two days time Triple L and I will celebrate the 46th anniversary of our marriage. I guess as a reality TV show we would not be nominated for the Gold Logie but if what I have found in him and have come to appreciate more and more is not love, well I don’t know what love is!